Suwari waza (sometimes referred to as Zagi waza) is a form of Aikido practice performed from the initial position of nage and uke sitting opposite and facing each other while kneeling  (seiza).

In the below video Takeda Satoshi Sensei (7th Dan AKI Aikikai) demonstrates the application of Aiki principles for Suwari waza where the uke strikes the temple of the nage.  This form of traditional attack is referred to as shomenuchi.

As Sensei is exploring responses from Suwari waza shomenuchi from a purely Aiki perspective, there is no predetermined outcome or pin as occurs when practising purely syllabus based Aikido.  The focus is on principle, with particular emphasis on not meeting an attack with physical resistance.

The above video was recorded at our dojo on 25 November 2017 as part of a special class by Takeda Satoshi Sensei during his 2017 visit to Australia.

Training with 2 person attacks (Futari dori) is a common form of Aikido practice.  There are numerous syllabus techniques that can be practiced in these circumstances depending on the nature and the type of attack.  Typically beginners practice with the ukes statically holding each arm under resistance.

As we progress to Aiki practice, formal syllabus technique is replaced with more free flowing and spontaneous responses.  The emphasis is on Aiki principles rather than defined outcomes.

In the below video Chicko Xerri Sensei (6th Dan, AKI Aikikai, Tokyo) explores Aiki principles for dealing with a 2 person attack where both ukes attempt to apply a morotedori based grab. Key learnings include:

Our dojo is an Aikido Kenkyukai Fudoshin dojo operating under the guidance and mentorship of  Chicko Xerri Sensei, 6th dan AKI (Aikikai), Tokyo.

Chicko Sensei has been practising and teaching Aikido for more than 45 years and is endorsed by Doshu Ueshiba.

The term morote dori refers to a traditional attack form whereby the uke grabs the nage’s wrists with 2 hands.  Responses to a morote dori attack are practised in our school both from a static position under resistance and also in free flowing form.

In the below video Takeda Satoshi Shihan (7th Dan AKI/Aiki Kai, Kamakura BudoKan) uses both static and free flowing forms of morote dori to explain the Aiki principle of “gathering an attack”.  Sensei explains how to use this principle to take the uke off balance and then project the uke with a kokyu intent.

Associated Aiki principals also referred to in Sensei’s instruction include:

The video was recorded as part of special class given by Satoshi Sensei at our dojo on 25 November 2017.

I had the good fortune opportunity on 19 November 2017 to a attend a mini seminar by Takeda Satoshi Shihan at Aikido Kenkyukai International Fudoshin Dojo Australia, Sunshine Coast Australia. It was the first time I have had the opportunity to train with Sensei. Fortunately, the opportunity would repeat itself as Sensei visited our own dojo a week later. 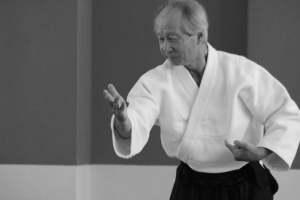 Whenever I go to a seminar I always hope to either learn something new, gain a deeper insight into something I already have some knowledge of, or otherwise just be inspired. The mini-seminar delivered all three. Further, Sensei was incredibly generous with his time and went to much efforts to ensure we understood his teachings and unique perspectives on higher level Aikido practice.

Key learnings included an exploration of such Aiki concepts as:

Sensei also explained the difference in the way grab based attacks were carried out in pre-war and post war Aikido, specifically the combined use of atemi (strikes) in pre-war times. As an additional bonus, Sensei also demonstrated of various Aiki Budo pins rarely seen in modern Aikido practice.

Dojo friend Steve (AKA Haybigz Bender) recorded the seminar and kindly agreed to let me post his highlights video (see below).

Huge thanks to Chicko Sensei for organising the event and also to all the folk from the 2 Sunshine Coast Dojos for making me feel so welcome.