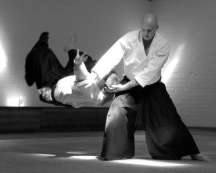 This video training note examines ryotedori kokyu nage and koshi nage applications.  The video extract is from from a class given by Peter Kelly Sensei (7th Dan, Aikido Yuishinkai) at the Aikido Warrior Dojo on 17 May 2014.

Peter Sensei’s interpretation of koshi nage (hip throw) is heavily influenced by the approach taken by Yoshio Kuroiwa Sensei. Peter Sensei makes the following comment in this regard:

“Yoshio Kuroiwa Sensei always taught with a stick to teach lines and internal power vectors and triangulation. He was very martial, an ex boxer. Great understanding of movement. I have tried very hard to follow his style of Koshi. If it’s easy and smooth, no can defence.”

In the video extract Peter Sensei notes that O’Sensei often joked that he could do koshinage all day and not get tired.  The ukemi challenges associated with koshinage are also explored.