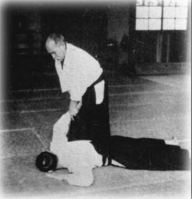 In the below video, Mike Jones Sensei (New York Aikikai)  demonstrates how to perform a basic yonkyo (No 4 wrist technique) from a cross hand grab (Ai hanmi katatedori yonkyo).

The video also includes a step-by-step breakdown of the mechanics of applying yonkyo where the nage has initially responded to the attack as if they were completing an ikkyo technique.  The reason for this approach is that an ikkyo entry is one of the easiest ways to initially set up the conditions necessary for an effective yonkyo response.

Ai hanmi katate dori yonkyo is referred to Kosadori yonkyo in some schools. See below video of Morihiro Saito Sensei (9th Dan) explaining the fundamental elements of  Kosadori nikyo as practised by O’sensei in the immediate post war period of his training life.

Of note at Step 3 in the the video, Koretoshi Maruyama Sensei changes his hand position prior to executing the yonkyo cut to what is referred to as a “traditional sankyo” hand position.  This is done in part to aid easier learning of the technique.

However, it should be noted that the change in hand position is not critical in the omote application of sankyo if the intent is to merely cut the uke straight to the mat (as occurs in the video).  The hand change without the sankyo is demonstrated in the following photographs. 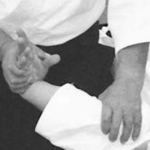 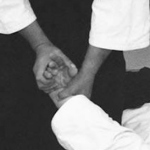 From a martial perspective, one of the concerns about yonkyo is that it’s effectiveness relies on the uke experiencing ulna nerve pain.  However, about 10% of people seem immune to this type of pain.  This, combined with the possibility of nage error in its application, makes yonkyo a potentially high risk technique.

To minimise this risk it is essential that the technique be applied on a uke whose balance is completely broken.  This facilitates alternate back up options should things not go as planned. For example, in the context of the above method of application, an attempted (although technically not successful) yonkyo can still be used to take an unbalanced uke to the ground.  This is done by the nage directing energy to the uke‘s elbow and driving it to the mat.

Enjoy the rest of your week.