In the below video Master Koretoshi Maruyama, Founder of Aikido Yuishinkai, demonstrates and provides instruction on the Aikido technique, yokomenuchi kokyu nage (irimi), as is practiced in our school.

The technique is performed as a response to a yokomenuchi strike, which is a side blow to the head.

Yokomenuchi kokyu nage is a particular useful technique for developing fundamental skills in timing, entering and directly meeting an attack without clashing.  We have also found at the dojo that with slight modifications, yokomenuchi kokyu nage (irimi) can be used to effectively deal with non-traditional strikes, including for example a hook punch.

Yokomenuchi kokyu nage (irimi) has a long history in Aikido. The technique appears as technique number 42 in O’sensei‘s first technical manual “Budo Renshu” (1934).  The notable difference in this early version is that the nage cuts down through the uke‘s neck and also cuts down and then hold’s the wrist of the uke’s attacking arm.  (See O’sensei‘s drawings below).

However, the kokyu ho principles necessary to effectively apply the technique remain the same. 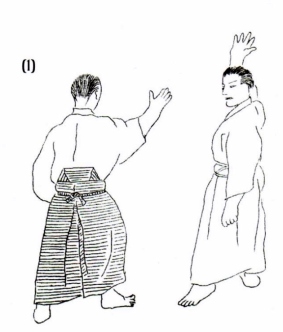 In O’sensei’s 2nd manual “Budo” (1938) the roles of nage and uke for the technique are described as follows:

“Uke: Deliver a yokomen strike with your right hand.  “Tori (i.e. nage): Step forward on your left foot and use your left te gatana (i.e. hand sword) to neutralise your opponent’s attack, simultaneously striking his face  (and down him).”

Kokyu ho exercises are something that we do a lot of at our dojo as a means of developing internal strength in our techniques.  Kokyu ho exercises were the traditional method used by O’sensei to develop “ki power” in his Aikido.

In the below video, Morihei Saito Sensei demonstrates and explains the kokyu ho exercise relevant to yokomenuchi kokyu nage (irimi).