The notion of ki and its role in Aikido training can be one of the most confusing, obscure and sometimes divisive concepts in our Art. Finding an understandable definition of ki can be quite challenging to say the least, particularly as its meaning differs depending on the context in which the term is used. Cultural and language barriers also pose a challenge.

From a practical Aikido training perspective, however, one of the most readily understandable, pithy and helpful explanations on the subject is that given by Gozo Shioda Sensei in his text Total Aikido: The master course (1997).  He states:

“In Aikido we often use the word “ki,” or energy, but this word covers a variety of meanings. “Ki” as it is manifested in the performance of techniques is what we have when the components of correct posture, centre line, breathing, the explosive power of forced energy, timing, etc., come together so that we reach the highest state of perfect balance. It might be said that “ki” is “the mystery of balance.”  ……

“Aiki” (i.e. harmonising of energy) means to lose your ego, it is the technique of submitting to the natural flow of the universe. By doing that you can effortlessly realize your own natural self-defending on the situation that is in front of you, and it is by developing this harmony that we find the realization of aikido.”

So, if I’m reading this right, what is being suggested is that ki in Aikido practice should be looked at as the highest state of “perfect balance” that can be acquired through ego free training that focusses on the basics. Sounds like a pretty good way to train to me. 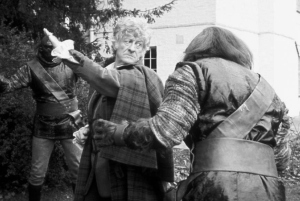 I just finished watching the latest episode of Dr Who and to my surprise everyone’s favourite time lord appeared to use his Aikido skills – something he hasn’t done in like 35 years.  It reminded me that the first time I heard of our martial art was through watching the TV show in the early 70’s.

That’s right, we “whovians” were introduced to Aikido more than a decade before Steven Seagal ripped into his first ikkyo on the big screen. Although I must admit, at the time I thought it was a martial art made up especially for the show.

Throughout his 3 year stint as the 3rd Doctor, Jon Pertwee regularly broke into irriminage, kokynage, sankyo and yoko otshi when needed – all supported by atemi and kiai as appropriate.  Not surprisingly, there was a bit of sci fi embellishment thrown in for fun. As I recall the Doctor trained at a dojo located on Venus.

The Doctor also had the honour of being the first 2 legged creature in the universe to actually master the Art in his school.  Apparently, prior to the Doctor, the only creatures who had been able to do so had 8 legs! 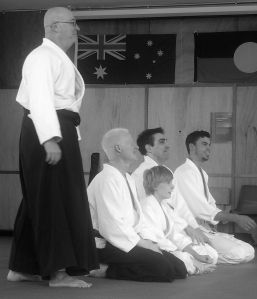 There is an often cited quote from the Founder of Aikido, Master Morihei Ueshiba (O’Sensei), that goes along the following lines:

“Aikido is not a technique to fight and defeat the enemy. It is a way to reconcile the World and make human beings one family.”

I have often pondered on this statement and wondered how it is possible that a martial art or any form of budo for that matter could hope to achieve such a lofty goal.

In the context of Aikido, its probably not that surprising that I can never recall anyone ever talking about World peace or anything like it. Our efforts on the mat are exclusively focussed on developing our skills, working on ways to improve our body structure and basically enjoying our practice. After class many of us then head out for a coffee, have a few laughs and then return to our regular lives. World reconciliation just never comes up.

It then struck me the other day as I was leading a class that I had missed something obvious. Looking around the dojo there were people of different ages, background, gender, physical ability, work life, etc. Everyone was working together to help each other improve their skills and understanding, be safe and just have fun. In short, they were just enjoying each other’s company and learning from their differences.

I then realised that this is what O’Sensei was probably talking about.

The decision to open up a new Aikido dojo is certainly not for the faint of heart.  In the modern world, its establishment alone is filled with many challenges and responsibilities, including arranging insurance, dojo space, affiliations, mats, licences, management and financial systems, compliance with legislative obligations, policies and procedures, advertising, …. and the list goes on. 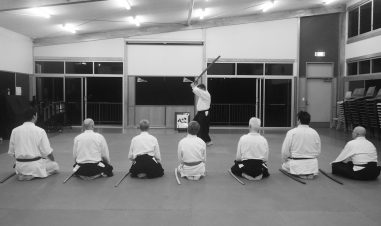 With all these issues, and the fact that it’s much easier to be a student or guest teacher at someone else’s dojo, the most common question I get asked is why did you open up a dojo?

For me the answer to this question is simple – it’s something I’ve dreamed of doing since the first day I stepped on a martial arts mat some 40 or so years ago. Back then it was a Judo mat, but as time went on I transitioned into Judo’s sister art, Aikido.  While the martial art changed, the dream to start my own dojo never waned.

So what is it about a dojo (or “place of the way”) that makes it so special?  The obvious answer is that it’s a place where you get to learn, explore, share, and practice your Japanese martial art of choice with those who have a similar passion and interest.

For me, however, a dojo is more than this. It’s a place where we can leave our problems at the front door and for the relatively short time that we are there, live in a world which is positive, encouraging, free of politics, welcoming, non-discriminatory and fun.

The way I see it, the world is full of institutions, systems and individuals apparently hell-bent on putting people down and stripping them of their confidence. A dojo is an escape from this. My suggestion to anyone who has walked into an Aikido dojo and experienced feeling worse about themselves than when they went in – find another dojo.

And so when I opened the doors of Aikido Warrior Dojo for the first time on Saturday morning 8 March 2014, I had no doubts about what I was doing – this is where I was supposed to be. The fact that we were immediately greeted by 2 “welcome swallows” who decided to join us while we set up seemed only appropriate.

Finally a big thank you to everyone who helped set up Aikido Warrior Dojo in the last couple of weeks.  I couldn’t have done it without you.

The need for a cooperative dynamic in Aikido practice is widely acknowledged by most of us who practice the Art.  Aside from the non-competitive philosophy that underpins Aikido, there is the practical reality that many techniques would be unsafe to practise without at least some element of compliance from our training partner.

A question worthy of consideration, however, is where to draw the line between cooperative practice and pointless practice (i.e. practice that removes or substantially diminishes the opportunity for both parties to learn).

For training to have learning validity, I think a good starting point is an acknowledgement that Aikido practice is between two equals.  That is, it’s not between a human and a rag doll, or a human and some form of “uke-bag”.

Quite the contrary, Aikido practice involves an ongoing  2 way interaction between the attacking  and responding partners (i.e. the uke and nage) who are acting as equals with a view to enhancing their mutual knowledge and skills. This is so, whether it be in the form of kata or free-form practice (taninzugake).

That being said, where one draws the line between 2 equals engaging in productive cooperative practice, as opposed to pointless practice, is something that might cause reasonable minds to differ. Certainly, even the very notion of such a concept as “pointless  practice” imports an element of subjectivity.

However, as a working model for uke’s trying to keep on on the right side of the cooperative line, I think a practice methodology whereby the uke acts as follows is not a bad start:

How far the uke can go beyond this line before degenerating into competitive and potentially dangerous practice is worthy of an article on its own.  Certainly, enthusiastic free form practice can inadvertently and quite quickly slip over into competitiveness and potential danger.  Fortunately, one of the roles of the class sensei is to intervene at this point and save us from ourselves!