Its always disappointing to read and hear martial artists criticise how each other train and make comparative negative assessments on the worthiness of differing Aikido schools and martial systems. Martial art bigotry of this kind has never had a place in our dojo and never will.

We have had the privilege on many occasions of having visitors train with us from different styles of Aikido and martial arts systems, including judo, tai chi chuan, taekwondo, jujitsu and traditional sword practitioners.  In all instances the interaction has not only given us some insights into their respective martial art/sport, but equally importantly given us greater understanding of our own Aikido and training practices.

In the below video, Dojo Senior Jeremy Gehrke, who is also boxing student, gives me the opportunity practice my Aiki parrying skills in response to committed boxing strikes.  The technique that is ultimately applied (on the change of strike) is a form of breath throw – Jodan tsuki kokyu nage.

I should add that the video should not be viewed as Aikido vs boxing.  Nothing could be further from the truth. Jeremy is doing no more than giving me two forms of committed boxing strikes  and allowing me to practice and develop responses to them using Aiki principles.  In short, he is a training partner graciously assisting me to learn and not a competitor in any way.

In the below video Dojo seniors (Ian Grant and Peter Marendy) practice jodan tsuki as it is typically trained in our dojo.

Ushiro in Aikido training refers to a broad set of attack forms whereby the uke attacks the nage from behind.  Examples of ushiro attack forms include:

In dynamic Aikido practise an ushiro attack is typically initiated from the front such that the uke enters first by grabbing the wrist and then moves to the rear of the nage.  The grabbing of the wrist can occur intentionally (eg the uke intends to undertake a ushiro ryotedori attack) or as a result of the nage responding to the initial attack by using their hand-sword to make connection and initiate defensive action.

In the below video Chicko Xerri Sensei (6th dan – AKI Aikikai) demonstrates the aiki principle of “creating a place to move” at first contact to create immediate opportunity for Aikido technique.  Notably, the approach taken by Chicko Sensei differs to what is often seen in Aikido practise whereby the nage takes the higher risk martial option of allowing the uke to move around to the nage‘s rear.

In the below video, seniors from Aikido Warrior Fudoshin Dojo demonstrate an alternate irimi based option for creating a place to move.

Chicko Sensei in the following video provides an overview of other Aiki principles important for ushiro practice. Notably, Sensei uses the sword to demonstrate the origins of the principles.

Our dojo is a Fudoshin dojo operating under the guidance and mentorship of  Chicko Xerri Sensei, 6th dan AKI (Aikikai), Tokyo.  Chicko Sensei has been practising and teaching Aikido for more than 40 years and is endorsed by Doshu Ueshiba.

Tsuki zenpo nage is one of those techniques that for years had me baffled as to how it had any martial relevance  at all.  For those not familiar with the technique, it is more commonly seen in ki aikido dojos and basically involves the nage stepping to the side of a strike to the stomach, taking the uke’s arm and projecting them off.  The idea that a strike or thrust by a uke to a nage’s abdomen could ever result in the uke being able to be projected forward into an unavoidable roll-out in this manner always seem far fetched to me.  Further, I had never had anyone actually be able to do it to me without my full cooperation.  In the end I began to see the technique as nothing more than a rolling exercise.

Recently I came across a black and white video recorded sometime in the 90’s that included a range of hiji waza (elbow techniques).  To my surprise I recognised a hiji 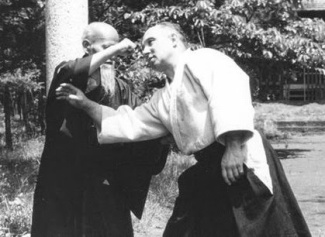 So how did it differ?  Firstly the nage commenced the technique with a double strike to the uke’s abdomen and temple to break the uke’s balance at first instance (see photo of O’sensei at right).

This then easily segued into a locking of the elbow joint which in turn enabled the nage to continue to take the uke’s balance and then project them forward into an unavoidable roll. Any other response by the uke (eg resisting the roll out) would risk serious elbow damage.

Notably in the more typical Tsuki zenpo nage the elbow locking, as well as the atemi, was completely omitted.

Unfortunately, what has happened here is an example of an Aikido application being watered down (presumably for safety or philosophical reasons) to the point it had become martially irrelevant.  By removing the atemi (strike) and the elbow lock, the essence of the technique had become completely lost turning it into no more than an aided rolling or blending exercise. 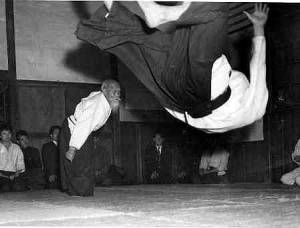 Far more concerning, however, is that many of the Aiki principles underpinning the technique (you know what we are actually supposed to be learning) had been completely stripped from its application.  These include balance breaking, entering while moving off-line, “heaven-man-earth”, and nage/uke sensitivity and connection, and ukemi responses from an off-balanced position.

In the below video seniors from our dojo can be seen practising  Tsuki zenpo nage with the atemi and elbow lock included in the application.  In some instances, the nage also takes the added precaution of üsing their hip to provide added assurance that kuzushi (balance breaking) is maintained throughout. 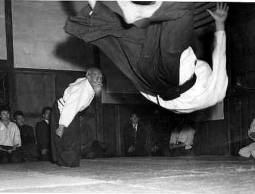 Hiji waza (elbow techniques) are always practised with a high degree of caution.  These forms of Aiki applications rely on pressure either being applied to the elbow joint or alternately locking the elbow joint to facilitate the balance taking necessary to execute the throw.

In the below video seniors from our dojo demonstrate one of the most basic forms of hiji waza – Ai hanmi katatedori hiji nage (sometimes also referred to as kosadori hiji nage).  This particular type of projection is practised from an attack in the form of an opposite single hand grab to the wrist.

Notably in some schools the technique is labelled as a form kokyu nage (breath throw).  This is most appropriate given the kokyu ho based movement underpinning the application. 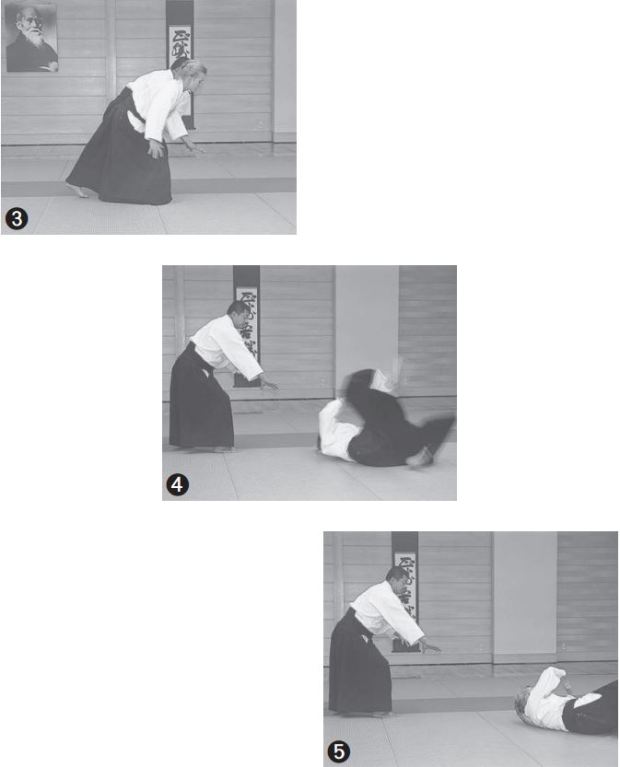 In the below video S Crane Sensei demonstrates and provides instruction for an alternate elbow projection application referred to as Ai hanmi katatedori hiji kime.