Striking arts  (atemi) are an integral part of aikido practice.  It is often stated that as much as 70% of Aikido is about atemi.  Some sources suggest that this percentage should be more like 90%.

While atemi waza can be an end in itself,  it is also used in Aikido to do any or all of the following: 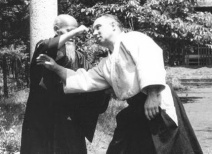 In the below videos, Morihiro Saito Sensei (1928-2002) demonstrates some of the striking options practised by Master Morihei Ueshiba (the Founder of Aikido) in the post war period of his training. Consistent with our commitment to study the Aikido of the Founder, the demonstrated striking options form an important part of the training that we undertake at the dojo.

For ease of reference, the videos are arranged based on classification of technique.