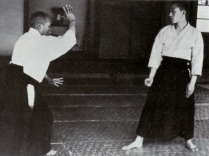 For those interested in Aikido as a method of self-defence, an important aspect of Aikido training is the practice of methods for parrying and deflecting attacks.

In the below video produced by the TenShin Aikido Federation, instruction is given on how to effectively deflect a shomenuchi (downward temple strike) using what is sometimes referred to in Aikido as a suriage movement. This method of deflection is particularly effective in addressing a shomen strike and when done correctly readily sets up a variety of Aikido applications.

In Aikido Yuishinkai the suriage movement is practised at the beginning of every class as part of the ikkyo solo exercise in the Aiki taiso.

In the below video taken at a class at our dojo, suriage is used to set up a kaiten nage (or wheel throw).